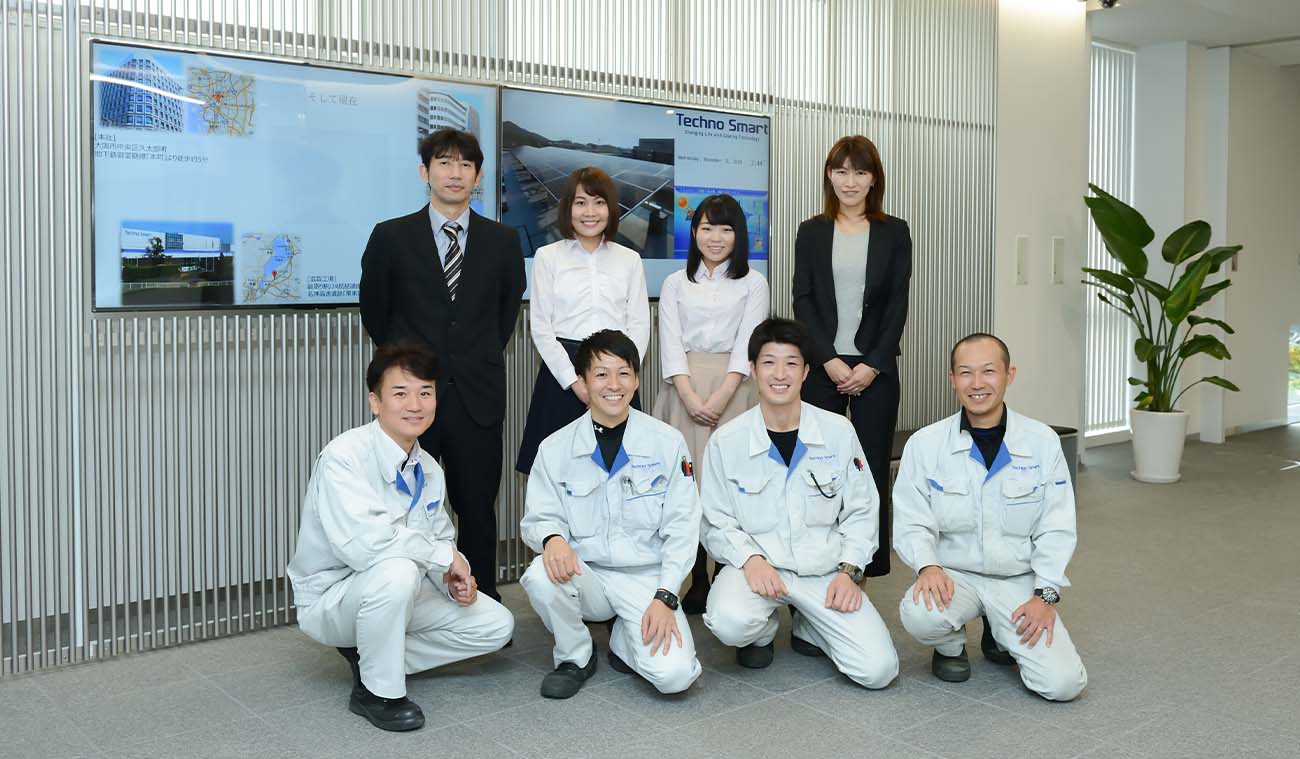 Contributing to advanced technology with the latest coating and drying equipment

We offer a wide range of coating and floating technologies that make full use of various products such as high-performance coating machines and dryers.
Each product is made to order and supports all aspects of equipment design / manufacturing, equipment assembly / installation / test run. From the design of the device to the completion, we are a device maker full of charm of manufacturing that is created from scratch by craftsmanship. 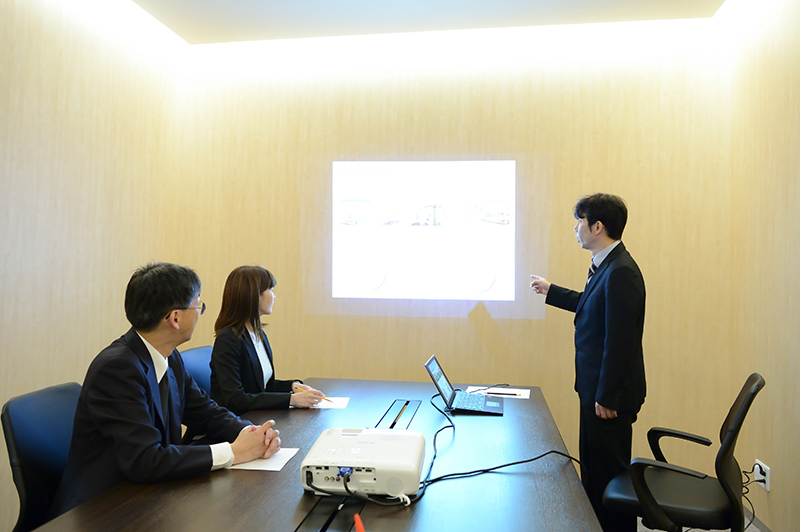 As a sales representative

I belong to the sales department. The sales staff not only serve as a point of contact with customers, but also play a role in connecting customers with various departments of our company.
The project that I am introducing here is one of our largest projects. It was a big project for us, which took two and a half years from receipt of an inquiry from the customer, followed by estimation, contracting, and design and manufacture of the equipment, to completion of delivery and adjustment.

For us, the sales department, it was not easy to reach a point where we could receive an order of this project. When it comes to large-scale projects, I do not think that it was possible for us to receive an inquiry from the customer without a strong continuous relationship of trust between the customer and us, despite the fact that there are several machinery makers in the same industry other than our company. I suppose that the customer checked all aspects of our capabilities of planning, engineering, manufacturing, adjustment, and response. In a sense, there may have been some twists and turns until we received the order of this project, but I believe that why we could receive the order is because we have built a trust relationship with the customer over 20 years.

By the end of this project, I have collected a huge number of business cards of the customers and people involved. Working on the project for two and a half years, I had a valuable experience of feeling like a member of the community to complete the same project, regardless of the position of a customer or manufacturer.
It was a very emotional project for me, as it was always rewarding and there was a sense of accomplishment that I had never experienced after it was over. 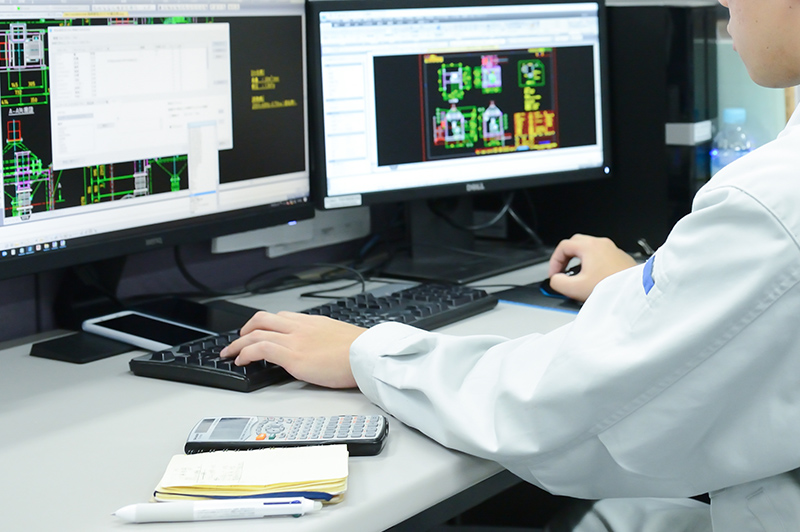 As a person in charge of planning and design

I am in charge of planning and design in the Engineering Division. My job of design planning is to have a meeting with a customer who sent an inquiry, start background research, and create drawings and specifications from scratch. When we received the inquiry for this project, we immediately knew that the equipment was highly expensive and challenging. So, I remember that I got excited about the job when I was assigned to it.

Among many inquiries, it was easy to predict that this project would have a large number of equipment, thus requiring a high volume of technical studies and documents. For specifications, this project required 60 pages, whereas 35 pages are required for usual equipment. For research items, 100 items (120 pages) were required for this project, whereas 40 items (25 pages) are usually required. Submission and correction of these documents were repeated seven times during the three months from the inquiry to the order.

Every time some parts in a large number of background research items or specifications were corrected, we tried to create such documents so that not only the drafters themselves but also the customers and relevant departments could easily understand the concerned parts. To shorten the correction work period until submission after a meeting, we improved the work efficiency by making full use of a spreadsheet program.

To ensure that we meet a deadline for submission of the documents requested by the customer, the planning and design staff worked together as one. Keeping in mind that any mishandling caused by the planning and design department should not result in a failure to receive the order, we paid close attention to preparation of documents and dealing with the customer.
The joy of successfully receiving an order was still a memorable and enjoyable job./p> 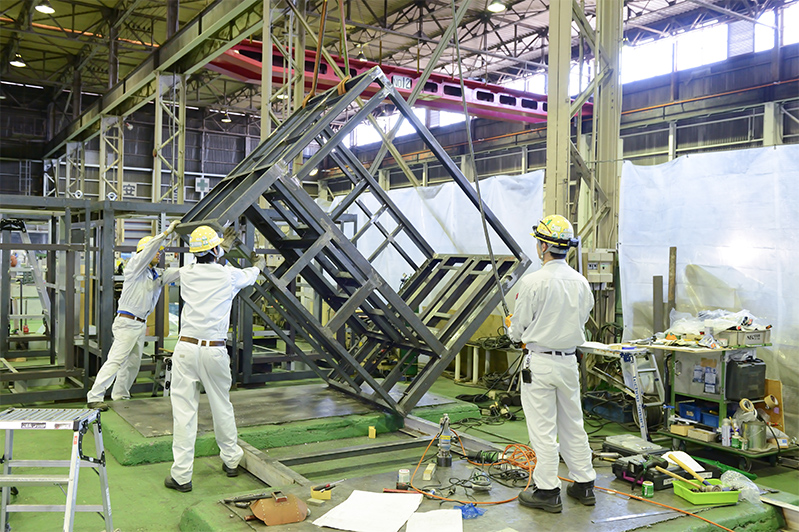 As a coordinator for machine design

I was appointed as a member of this large-scale project and was able to experience various things. It took more than two years from the start of this project to its completion, meaning that how big the equipment was for us. As for myself, in many senses, I feel that my technical and interpersonal skills have improved.

First, as a position to coordinate the machine design, I took part in this project from the kickoff meeting to the final test operation check. I did not directly do execution design work, but I was involved in the project as a manager. In this project, several companies gathered at a meeting to determine the specifications. Since the project was large in scale and the specifications had a high degree of difficulty, we faced a crisis many times, having different voices to decide just one specification. We had a lot of meetings to discuss matters until all of us could be satisfied, as we moved forward little by little. Gradually, we became able to exchange opinions with related parties beyond the walls of companies. We could discuss anything about technical aspects of the project and suggest a variety of ideas. We occasionally received criticism, but I learned a lot from this project.

The final test operation adjustment proceeded very smoothly until the completion, despite the large size of equipment. Thanks to the efforts of all the members, we could meet the delivery date contracted. The final meeting became large in size, in which dozens of people participated. At the moment when the acceptance test was completed, we took commemorative photos. Such an event apparently made my past experience and common knowledge be overturned. (Usually, we do not take commemorative photos at the end of a project, after the test operation completion document is signed by the customer.)

Moreover, the smiles of our customers were so good that I would never forget them. I am sure that this was because we had been through good times and bad times together for more than two years towards one goal. I think that this is one of the real joys of working in our company, which handles production to order.

At the end, the customer invited us to a party to celebrate a successful completion, where we could praise efforts and express gratitude each other. This project brought me good memories until the very last moment.

Please feel free to contact us for consultations and estimates.